The winter months may be known as a time for rest, but in Carson Valley, Nevada, the winter season is a time when wildlife viewing is at its peak. Carson Valley’s diverse ecosystems, including grassland, wetland, chaparral, montane and alpine, support an array of ecological communities. These wild communities come alive with activity as temperatures drop and unique opportunities arise. It’s during this time that birdwatchers, wildlife watchers and wildlife photographers can experience the balance of conservation and agriculture in person.

Each winter, bald eagles, golden eagles, falcons and hawks concentrate in the valley to feed on nutrient rich afterbirth provided by the calving season across the region’s ranches. The phenomenon highlights the role that the ranching community plays in providing winter nourishment for the birds of prey, and other wildlife like coyotes. During the months of December, January and early February, visitors to Carson Valley can readily experience an unprecedented close-up observation of the remarkable wild raptors. During Eagles & Ag, set for Jan. 28-31, 2021, attendees can participate in special guided tours to witness this occurrence firsthand.

Located in the Carson Valley community of Genoa, the River Fork Ranch is both a preserve and working cattle ranch. The ranch is also one of the few remaining habitats to the Western Pond Turtle, a declining species of the West Coast and Nevada’s only freshwater turtle. The population in Carson Valley is part of a study to uncover the pond turtles’ habitat use, range, dispersal patterns, population dynamics and genetic source.

Carson Valley is just 45 miles south of Reno, Nevada’s second largest city, but the region is vast and open. The native large wild mammals such as mountain lions, lynx, mule deer and wild horses thrive among the area’s scattered ranches, farms and country roads. Winter’s periodic blanket of snow gives visitors more opportunities to spot and view the wildlife as they go about their activities. To Carson Valley’s eastern desert geography, watchers can spot wild horses protect newly birthed foals. To the west in Sierra foothills, careful viewers may find a lynx relaxing in the winter sun.

River Fork Ranch: River Fork Ranch is an 800-acre preserve owned and operated by the Nature Conservancy, working to preserve the floodplain, restore habitat and practice sustainable agriculture. Located where the east and west forks of the Carson River converge near Genoa, River Fork Ranch is both a nature preserve and a working cattle operation. The ranch’s riparian corridor and patchwork of pastures, meadows and wetlands support a robust and diverse wildlife population including bald eagles, sandhill cranes, leopard frogs, monarch butterflies and mule deer. For more information, visit online and watch the video here. 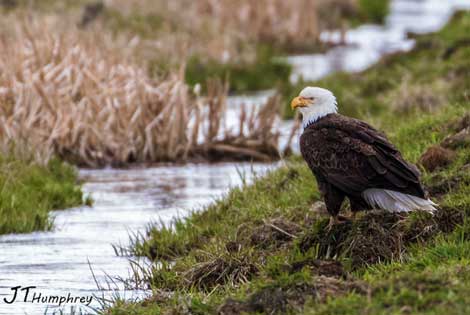 Eagle at the water

Lahontan Audubon Society Area #3: With its mix of pasture-grasslands and riparian wetlands, the western side of the Carson Valley, including the Carson River corridor, is recognized as an Audubon Important Bird Area. The Carson Valley area is home to wintering raptors including bald and golden eagles, rough-legged and ferruginous hawks and prairie Falcons. Red-tailed hawks, northern harrier and American kestrel are residents. White-faced ibis and a modest number of sandhill cranes may be observed. A colony of tricolored blackbirds breed in the Carson Valley, the only known occurrence in Nevada. For more information on this Audubon birding area, visit online.

Topaz Lake Park: This park occupies 90-acres on the shores of Topaz Lake, a reservoir on the Nevada-California border about 20 miles south of Gardnerville. The park is a well-kept secret among birdwatchers and small birds sighted at the park include orioles, swallows, red-winged blackbirds and yellow warblers. A pair of bald eagles nest nearby, while ospreys and pelicans are frequently seen.  During the migration season, the park’s location on the Pacific flyway makes it an especially good bird-watching spot.

Extra care, distance, respect and safety is encouraged when viewing wildlife. For tips on photographing wildlife in the valley, visit here for tips. For more information on wildlife viewing in Carson Valley, please visit online. To plan a trip to Carson Valley, go to VisitCarsonValley.org.